The selected works were chosen by an ECA+ sub-committee of local arts leaders, bicycle advocates, and other community members. Prominently located on Cottage and Union Streets, the sculptural bike racks are being installed in close collaboration with the City’s DPW department.

A celebration of the permanent sculptures will take place at 3:30 pm on November 12 in front of the Cottage Street municipal parking lot. All are invited to the celebration. Following the dedication of the bike racks on Cottage Street, all will bike or walk to Union Street at the corner of Railroad Street. 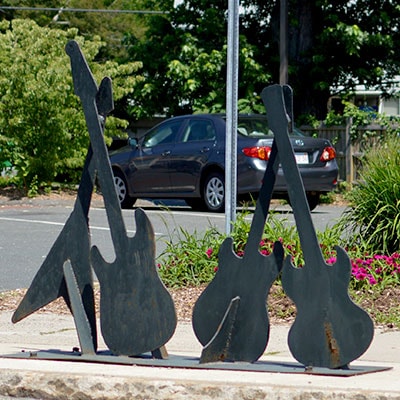 Matt Evald Johnson’s sculptural bike racks “Guitar Icons” will be in the heart of the Cottage Street Cultural District in front of the Cottage Street parking lot. Capturing the forms of the “eight most recognizable guitars” according to Johnson, his sculptures reflects the vibrant musical activity of Cottage Street. Johnson says, “ Those familiar with guitars will know what these silhouettes represent like the Gibson Les Paul, the Martin D-30, and the Fender Stratocaster.

Carolyn Clayton and Ben Westbrook have created a colorful contemporary sculpture that will serve as seven bicycle racks located at the corner of Union and Railroad Streets. Clayton describes the sculpture as a combination of the aesthetic interests of herself and Benjamin Westbrook. “Ben is interested in organic forms and asymmetry, while I tend to work with more angular structures and bold color.” The result is “a set of seven asymmetrical polygons fabricated from square steel tubing. The unique color palette and shapes will add a fun and sophisticated element to either location. It will alter the landscape by creating a three-dimensional line drawing in space that changes depending on the on the vantage point.”

“ECA+ has commissioned and implemented murals and short-term public sculpture in the past. We are excited to add functional permanent sculptures to the streets of downtown Easthampton created by some of our City’s talented artists,” says Burns Maxey, ECA+ Arts Coordinator, “These works will no doubt further the creative character of Easthampton and add to the City’s growing roster of public art projects.”

Matt Evald Johnson, creator of “Ectomorph” at Art in the Orchard, was born in Los Angeles and bounced around the country as a child following his father’s career as a professional athlete. After receiving a BFA in painting from the University of Houston, Johnson went to New York City where he received his MFA and settled as a working artist. He has major works installed nationally in corporate, private and public scenarios and has continued to be affiliated with galleries, sculpture parks, museums and Universities.

Carolyn Clayton and Ben Westbrook have worked together fabricating steel projects for the past three years. Ben has been a practicing blacksmith for twelve years and has undertook a variety of private and public architectural ironwork, such as railings, fireplace screens and including a fire-escape at the Eastworks building where Westbrook’s business BMW ironworks is located. Carolyn Clayton received her BFA in 2009 from Carnegie Mellon University with a focus in sculpture, installation and site-specific work. She has since completed a fellowship at the Vermont Studio Center and exhibited her work in Western Mass, Pittsburgh and New York City. Westbrook and Clayton live and work in Easthampton, MA.