Easthampton City Arts+ announces the installation of a new mural in the Cottage Street Cultural District by artist Luke Cavagnac. ECA+ commissioned Luke Cavagnac to create a mural at 123 Cottage Street on the side of the building that houses the Union Mart, a local convenience store. Cavagnac’s colorful work entitled “What starts with an E, has a stamp in the middle, & ends with a ton?” faces the entryway into Easthampton’s Cottage Street Cultural District. The mural was installed on April 23, 2015 by volunteers. 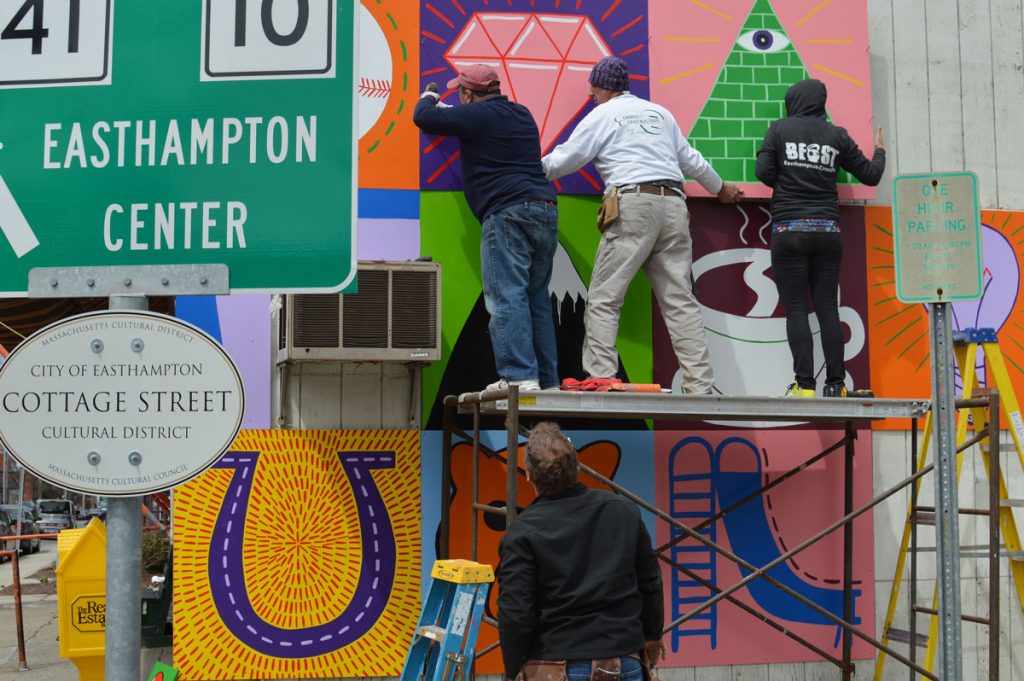 Cavagnac is an artist who has maintained his studio the Invisible Fountain for twelve years in Eastworks. He is a prolific painter that practices the philosophy of “Art for All” by selling affordable and accessible works. His mural is made-up of close to 50 relatable symbols such as slice of pizza, a bear, a diamond, and a baseball.

Building owner, Anjum Khawaja is supportive of the project and allowed to have the mural installed on the building. He said, “Many thanks to Easthampton City Arts+ for all the work they are doing in the community and making it a better place.” ECA+ approached Khawaja in 2014 to discuss the project and show a prototype of Cavagnac’s proposal. “Having positive partnerships with Mr. Khawaja and Mr. Abdul Butt, the owner of the Union Mart, is instrumental in making such public art projects possible in our city. We are so thankful for their generosity,” says Burns Maxey, Arts Coordinator.

Time, skill, and expertise were contributed by local contractors Mark Bonde of Bonde Construction and Randy Corbeil of Corbeil Construction. Together, they problem solved the installation process because the mural was constructed in parts by Cavagnac at his studio. They provided the needed tools to make the installation successful from transportation to saws. When asked why he was spending a Thursday installing a mural, Mark Bonde, who has lived in Easthampton for over 16 years, said, “I am doing this to get involved in the Easthampton community.” Volunteers from ECA+ Public Art and Cultural District subcommittees worked side-by-side with Bonde and Corbeil to move and install the work. Manchesters True Value Hardware also helped make the project possible with scaffolding support.

Special thanks to Patrick Brough for this time lapse video of the installation.

In 2005, a 9-foot mural was placed in the same location by a group of Cottage Street business owners, Cottage Street Stations. They had commissioned artist Sherid Adams to capture a historic scene of Cottage Street. The view of Nashawannuck Square, where the Brass Cat now sits, was based on a photo provided by Mai Stoddard, founder of the Nash Gallery and the former Wing Travel. Mai Stoddard along with other business owners on the street pioneered a vision of transforming Easthampton into a vibrant destination. The mural has been moved onto the exterior of 36-42 Cottage Street, closer to the view it depicts. Marlies Stoddard, current owner of the Nash Gallery with volunteers mounted Adams’ mural against the building’s side brick wall to increase its visibility.

Luke Cavagnac’s mural was made possible in-part by funding from the Massachusetts Cultural Council and Easthampton City Arts+. Another upcoming art installation, also made possible by the MCC, is scheduled on Main Street of a sculptural bike rack by Michael Poole of Blue Collar Artisans.